As early as 1869, the magistrate decided to also transfer the “Collection of Tools and Carvings from Local Monasteries and Churches”, the “Medieval Sandstone Sculptures” and the “Stained Glass and Wood Carvings” from the collections of the city library to the Historisches Museum that was to be built. This inventory was later supplemented by purchases or donations of sacred and profane works. These included architectural sculptures of torn-down houses or those destroyed during the Second World War, from the Middle Ages through to the 19th century, findings from archaeological digs in the city and the surrounding area and sculptures transferred by the Dombaubüro.
Architectural change in Frankfurt – Architectural decoration from the Middle Ages to the modern era

Whilst the city centre was being re-designed in the 19th and early 20th century, a considerable part of the Early Modern structure was pulled down. Fortunately, objects with particular value from authorities and private persons were secured and given to the museum. The collection comprises full plastic sculptures and sculpted architectural fragments from Frankfurt churches and secular buildings dating back to the 12th century. This includes depictions of the Madonna and holy figures, tombstones, gravestones, stones carved with coats of arms, house marks and craftsmen’s signs. Particular highlights are the Medieval Rhenish Man of Sorrows (ca. 1370), the Epitaph of Pastor Johannes Lupi (1468) and the Crucifixion Group at the Peterskirchhof (1507/1508) by Hans Backoffen as well as keystones from the Peterskirche, the Heiliggeistkirche and the Dreikönigskirche. After the demolition of the Peterskirche in 1895, numerous tombs of Frankfurt citizens came to the HMF’s Depot.


Secular construction in the Frankfurt of the 17th and 18th centuries is represented by the portal group of the former Palais of Thurn und Taxis by Paul Egell (1734/1735) and the facade sculptures of the Alte Börse, as well as intricate corbels and sculpted lintels. This inventory is complimented by house marks from the 15th to the 18th centuries. The HMF’s collection even includes sculptures from the many Frankfurt gardens, such as mythological figures of the 18th century from the Holzmann’schen Garden. The fragments of numerous Frankfurt fountains are of particular historical importance, such as those from the Justitia, Minerva, Bieber, Ritter or Tauben fountains. The Frankfurt coat of arms can be found on many portrayals of buildings in the 16th to 18th centuries.


Figures and portraits
During the first centuries of its existence, the  Historisches Museum Frankfurt also pursued collecting interests in craftsmanship from outside the region and thus acquired sculptures that were not of Frankfurt origin, such as two  attributed female saints. Finally, the museum also collects portrait busts of Frankfurt personalities, which originate from buildings, private collections or tombs. 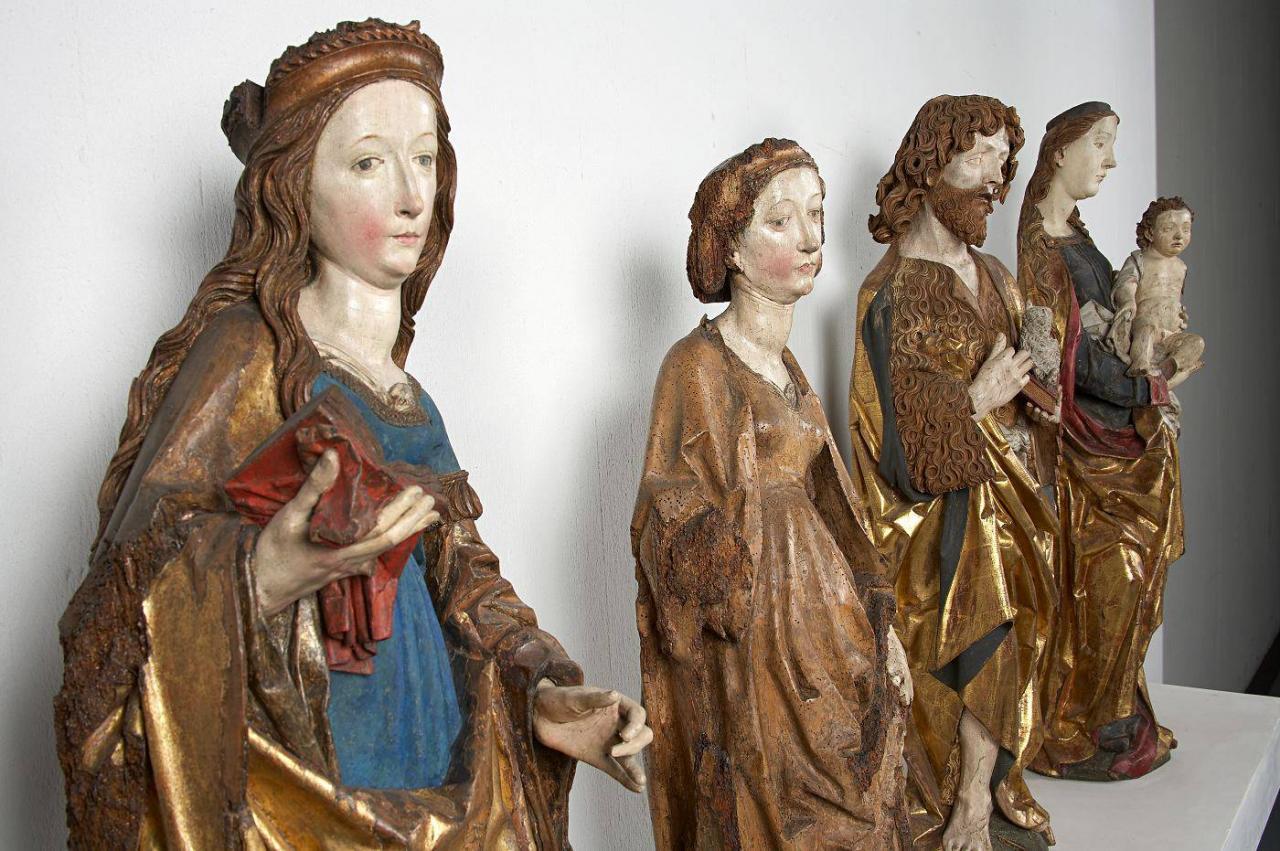