The legacy of Nazism still poses legal problems to museums to this day. Through the so-called “Aryanisation” of Jewish possessions in the “Third Reich”, cultural assets – sometimes of considerable value – ended up in exhibitions and repositories through forced under-value sales or expropriations. Due to the inventory of the objects often being consciously left incomplete, it is difficult to determine the rightful owners.

Funded by the Arbeitsstelle für Provenienzforschung in Berlin (today, the Stiftung Deutsches Zentrum für Kulturgutverluste in Magdeburg), a research project for provenance research was established between 2010 and 2015 in the Historisches Museum Frankfurt. During this time, art historian Maike Brüggen examined the past of the painting accruals and various objects from other collections in the museum dated between 1933 and 1945. In the centre, the museum was questioned about previous owners, the reasons for them being sold, donations or foundations. This was done by determining and decoding lettering on the back panels, artist and owner notes on paintings or handwritten records, dedications, initials or stamps on books, as well as researching previous owners in catalogues, holdings of records and sales documents or letters.


Based on the Washington Principles and the Joint Declaration, the museum strives to come to a just and fair solution with the rightful owners in cases of unlawful revocation or involuntary sale due to National Socialist persecution. One example of a successful restitution of a painting to the heirs of its original owners is the painting by Hans Thoma: “Sommer (Frau mit Kind)” (Summer, Woman with Child).

All accruals of the museum from between 1933 and 1945 which remain not very well known to this day are published in theLostArt internet database of the Deutsches Zentrum für Kulturgutverluste. Part of the research results were used in the first presentation of the new permanent exhibition of the Historisches Museum Frankfurt in 2012. The focus here is on the art collection of Jewish collector Julius Heyman (1863 - 1925). The Heyman collection of artworks, craftwork and paintings from the Middle Ages, Renaissance and Baroque periods, which are all important for cultural history, were initially presented in themed rooms staged in Heyman’s house at the address Palmstraße 16 in Frankfurt. Heyman bequeathed the house and its works of art to the city of Frankfurt and ordered that the house and its inventory be made open to the public and added to the Historisches Museum Frankfurt as its own department.

The collection was broken up against the donor’s wishes in 1940. Some of the art objects were given to different museums in the city; others were sold. The aim of the project – which continues to work on completing the data – was to trace the collection pieces so that the collection could be united once again, at least in virtual form.
The coat of arms of Saint Jerome is a prominent object from the old collection of Julius Heyman which has already been worked on. 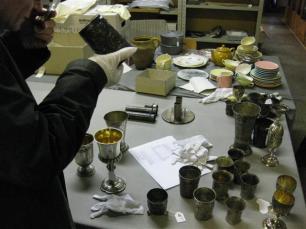